skip to main | skip to sidebar

Did I also mention that Carrie Fisher guest starred in episode 204 of the NBC show 30 Rock as nutjob writer Rosemary Howard? If you've never seen the show, let alone that episode, you're missing out. Go watch it. Now.

No, really. Stop what you're doing, hop onto Netflix (or something similar) and watch it. Not only is the show great, but the work Fisher does in that episode is some of the funniest stuff I've ever seen. I literally laughed out loud, much to Oddball's confusion. (Oddball is my youngest dog, and she likes to sit next to me in my office while I work.)

That is all. You may now return to your regularly scheduled lives. After you watch 30 Rock, obviously.
Posted by gamerpanda at 1:37 PM 0 comments

Carrie Fisher is My Heroine

One of them, anyway.

I can still remember that red-letter day when I became a fledgling girl geek. While we were living in Orlando in the early 1980's, my mother brought home a copy of Star Wars: A New Hope on BetaMAX. (For you embryos reading this, BetaMAX was the competitor to VHS, which in turn was the precursor to DVDs and Blu-Ray discs.) I watched the bejeezus out of that tape until it finally broke apart, if parental reports are to be believed. I nearly died with glee when my parents told me that there were two more movies that continued the story.

Why was I so enamored with this story? Was it the blaster pistols? The 8-foot tall walking carpet? The lightsabre battles? The eventual additions of Muppets? Nope. All those things were awesome (and still are, in my not-so humble opinion), but what really pulled me into the mythos was that, next to my mother, Princess Leia was the most gorgeous, kick-ass female I had ever seen in my (very short) life.

I went through a phase where I wanted to wear dresses 24/7 because the Princess could still kick butt while wearing one. I grew my hair long and while my mother bargained with me to go with a single bun rather than Leia's iconic hairdo from the first Star Wars film, it was close enough that my six-year-old self still felt like a classy badass when she entered kindergarten. This didn't stop my tomboy tendencies, however; far from it. If anything, the whole situation probably caused me to go take my unladylike behavior to a whole new level. I think there's even a photograph somewhere of me stuck on top of the monkey bars wearing some purple number I picked out from the base exchange.

Of course, it wasn't until I got a little older that I learned that the people in movies were actually actors telling a story. It sort of became apparent when I got to the age where I noticed that Han Solo and Indiana Jones looked an awful lot alike. It was at that time that I started wondering what Ms. Carrie Fisher was like as a person outside of those three movies I loved so dearly. As it turns out, she's the kind of multi-faceted person I would want to know personally.

She's written novels and scripts. She's got a wicked sense of humor. She's as open with her pitfalls as she is with her triumphs, and it is that fact right there that really gets me. Ms. Fisher, is so very, very human, and I like that about her. She laughs at herself, loudly and often, and seems to take herself only just seriously enough to get her work done. Some people, though, do not appreciate that particular quality, and seem to think that because she's a public figure she shouldn't succumb to those pesky human problems of weight gain and aging.

Look, people. If memory serves, Fisher is 53 years old and has a kid. I hope to all that is good and holy I look half as good as she does after I have my own children and survive 53 years on this planet. But, rather than rant at you further, I direct you to Ms. Fisher's website. There, she made a post that sums up how I feel about the entire matter perfectly.

The TL;DR version: If you're going to criticize a star's appearance, how about you put your money where your mouth is and post a photo of yourself alongside your words? While you're at it, how about posting your IQ and SAT scores? Fair is fair, after all.

Here, I'll even go first. Carrie, while I have no criticism to offer, these pictures are for you: 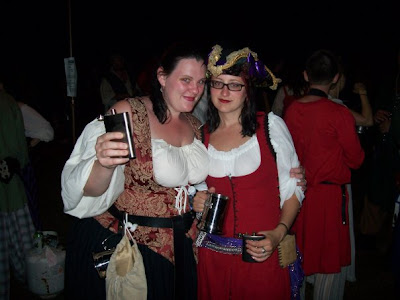 This photo is roughly 2 years old, but I look pretty much the same. That's me posing with my friend Chrissy at a late night pirate party during a festival called Pennsic in western PA. Not my most photogenic moment, but you can clearly tell I'm smashed and I'm loving it. OH, and did I mention I tip the scales at 275 in the photo? It bothers me not at all. Why? Because the people who matter couldn't give a damn if I was 300 pounds or half that. See next photo for an example. 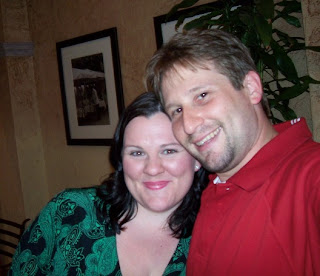 This is me at my 27th birthday party, with my husband John. He thinks I'm one of the hottest women ever, chronic thyroid condition and all. That's all that really matters. He loves me just the way I am, and the rest of you nay-sayers can suck it.

I've said it before, and I'll say it again: I'm fat and I'm awesome. Deal with it. And P.S.--My SAT score was 1150, most of the points coming from the writing and grammar portion. So there.

(By the way, this post was inspired by an open letter written by the ever-lovely Filamena over on her blog a week or so ago.)
Posted by gamerpanda at 6:15 AM 0 comments

I know, I know! Stop spamming my inbox! I know I haven't posted anything of substance in a while, but things are NUTS over here in Chapel Hill right now. I've been promoted (twice) in the last two months over at GameX, and now that we're *does some mental math* twenty-seven days from opening day and only TWENTY-ONE DAYS until pre-show, things will only get nuttier. Heck, the only time I've successfully remembered to eat on a regular basis is the weekends, and that's only because John won't let me get away with forgetting. He all but chains me to the 360 to make sure I don't overwork myself. (Which isn't all bad; we have upped our GamerScore by nearly 500 points this month. . .)

Anyway, my laptop decided to have a quiet meltdown in the office whilst we were playing games and doing household chores this weekend. This means I have to spend some time backing things up today to make sure I don't lose anything important. (And yes, damn you, my Sims 2 saves count as "important".) GameX files first, then everything else. As such, I'll have to make a proper post sometime tonight. Until then, I'd like to direct all of you to the excellent 30-second television spot NBC10 did for GameX. If you view, please remember to rate it and/or comment. Thanks!

P.S.--In the time it took me to write this post, my oatmeal went cold. Do you know how much cold oatmeal SUCKS? You better know how much I like you people. . .:-P
Posted by gamerpanda at 5:42 AM 0 comments